A two-day workshop on Information Economics was held at International School of Information Management (ISiM), Manasagangotri, University of Mysore, Mysore on March 19 and 20, 2012.

The workshop was presented by Dr. Abhinanda Sarkar, who is the Principal Scientist for Software & Analytics at the GE John F. Welch Technology Center, GE Global Research, Bangalore. Dr Sarkar received B.Stat. and M.Stat. degrees from the Indian Statistical Institute (ISI) and his PhD in Statistics (with a minor in Economics) from Stanford University, USA. He taught Applied Mathematics at the Massachusetts Institute of Technology (MIT), USA, for several years while pursuing research interests in time-frequency methods in stock prices and mutual fund ranking dynamics. He has also been visiting faculty at Stanford and ISI. While at IBM Research, he received invention achievement awards for his work on pricing of e-commerce services. His work in GE on consumer finance has earned him a Super Achiever Award.

In addition, he has enabled technology and published in the areas of default prediction from bond market analytics and decision support based on incomplete data. Currently, he works on data-driven financial risk management as it applies to sectors like energy and water.

In the first session with the students, Dr. Sarkar laid the foundation concepts for economics in the areas of microeconomics. Using examples from the auto industry, he illustrated key parameters of microeconomics such as Demand and Supply, Marginal Cost and Marginal Revenue, Pricing, Producer and Consumer Behavior, and Market Competition. All the while emphasizing the role played by information in microeconomic dynamics.

During the second session, he took the discussion to the pure role played by information in decision making by principal-agent interactions. He talked about salient issues that occur in infonomics in the guise of signaling, screening, incentives, and winner’s curse that explain microeconomic and macroeconomic behavior in everyday life. Using simple examples such as insurance policies, farm owners and their workers, and businesses and their contract labor, he explained the weight that information played in making choices and decisions. He also covered the application of game theory to the same examples to predict possible outcomes in choice making to achieve economic equilibrium. Asymmetry of information cases were also discussed in detail.

The sessions were concluded with an explanation of how decision trees could be applied to analyze bargaining between customers and sellers, and information exchanges that take place before a transaction is accomplished.

The students were appreciative of learning abstract concepts of economics co-related to real world activity, to grasp the evolving area of Infonomics driven by advanced IT. Dr. Sarkar, with his casual conversational style engaged the students, and took a complex topic and made it easy to understand. 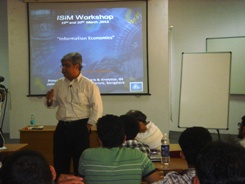 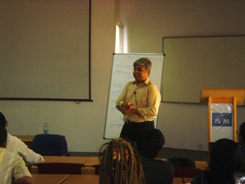 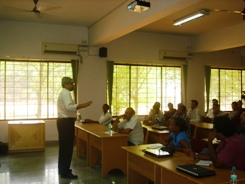 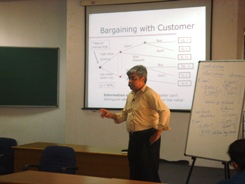 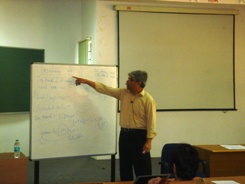